Making Itself Heard: The Many Voices of the Organ (part2)

“Making Itself Heard: The Many Voices of the Organ” (part2)
Departing Holland and crossing the channel, we also find organs in England with doubled ranks. But! There is an important difference between these organs and their Dutch cousins: the English organs double entire ranks of Diapasons, instead of only the trebles, and these ranks also have individual draw knobs. In the Dutch organs, doubled trebles were controlled by a single drawknob. We notice that English churches can also be cavernous, but we see that organs in those churches were not initially placed high in a gallery at the west end of the church, as was often true throughout the Low Countries, Germany and France. Instead, English organs sometimes sat, perched on top of the wall, or ‘screen’, that divided the longest part of the building (the nave) from the smaller area near the altar (the choir and sanctuary). An organ sitting on top of this screen was positioned about one third of the way down the center of the building. Since such organs could be seen from both sides of the screen, their cases could not have a back; rather, they had to have two façades, one facing East and the other West. This was likely the origin of doubled Diapason ranks — which continue to be used in some organs today — as two diapasons were needed to create the two fronts of the case. Whatever other reasons may have existed for these opposite-facing ranks, the result was that such doubled ranks could speak in two different directions at the same time, creating a kind of stereo effect that filled the church.
Crossing back to Continental Europe, we travel to the northern Scandinavian and German lands. In those places, like present-day Sweden and Germany, smaller churches often had relatively low ceilings, may have helped to keep these rooms somewhat warmer during the extremely cold winter months in northern Europe. But the lower height also prevented these churches from having the large, rolling acoustics of a stone cathedral. As a result of this, and particularly in places with wooden buildings, we only hear very dry acoustics that tend to absorb bass sounds quickly. Perhaps this helps to explain why the pedalboard developed more extensively in northern countries, complete with its own stops. Maybe large pedal divisions were designed to compensate for the loss of bass sounds in drier rooms. Of course, there are other important reasons for the development of the Germanic pedal division, but this just might have been one contribution to that development. At any rate, we hear large pedal divisions including multiple 16’ stops and even sometimes 32’ stops, or pipes that sounded two octaves lower than their written pitch. All that powerful bass allowed the Germanic organs to fill rooms with a great depth of sound.
By contrast, French builders discovered a wholly different means of filling large rooms. By the 17th century, they had discovered the brilliance that fiery reeds could heighten the elegance and excitement of the organ’s sound. Listening to organs throughout France, from the Classical era to the present, we hear reeds added to all divisions of the organ, including most especially the full-length 8’ Trompette and its higher neighbor, the 4’ Clairon. Indeed, we find these in multiple divisions, including the Grand Orgue and Pedal, and by the 18th century we even discover them populating the Positif and Récit divisions. It seems that the next logical step after building such batteries of trompette stops was to begin duplicating those ranks, such that the largest late-18th century instruments boasted two 8’ Trompettes and two 4’ Clairon on the Grand Orgue alone. Even before such duplication began, though, French builders had found ways of making their reeds so intense that they could not be combined with principal and mixture ranks, as was the case in organs further north. This situation changed in the 19th century, however, as higher wind pressures and new designs permitted the reeds to rejoin the flue pipes. (To be continued)
Your Friend,
Justin 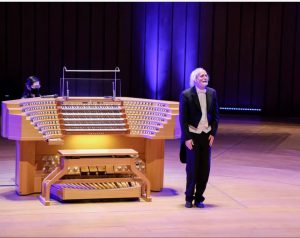