〜Aristide Cavaille-Coll (part I) continued (2)〜
Though the sound of these reeds with the mounted Cornet easily captivates the ear, the true voice of the Classical French organ is the Plein jeu, the principal chorus with mixtures. In these organs, this registration is distinguished by a sound that is as serious as it is elegant. Unlike the reeds and Cornet, the Plein jeu does not imitate other instruments, such as the trumpet. It is a sound unique to these organs that results from a marriage of pipe material, scaling and voicing, and the composition of the mixtures. The classic 8’ principal stop, called Montre (meaning”to sho”, as these pipes were visible in the façade), was made from a metal alloy rich in tin, with relatively narrow scales, and somewhat gentle, unhurried voicing. The 4’ principal, Prestant, was similarly fashioned. Because both of these ranks of were made with a generous amount of tin, as opposed to the high lead content typical in other countries’ organs, they could be burnished to make them shine in the organ’s facade. This fact combined with their narrow scaling to produce a bright timbre with plentiful overtones. (Note: Scaling just means how wide or narrow pipes are compared to their length. Generally, narrower scaling highlights overtones, while wider scaling emphasizes the fundamental, or unison pitch.) We know that the Plein jeu was a highly prized registration by organists throughout the seventeenth and eighteenth centuries because virtually every suite of French music from that time (except suites of Noëls) began with this combination of stops.
Above the 8’ Montre, 4’ Prestant and 2’ Doublette (all principals), two mixtures were added to create the Plein jeu: the lower-pitched Fourniture and its higher counterpart, the Cymbale. You probably remember that mixtures are generally high-pitched anyway. In seventeenth- and eighteenth-century organs, the mixtures used on 8-foot organs (i.e. organs wherein an 8-foot stop is the lowest principal on the Great, as opposed to a 16 or 32-foot manual principal) typically began at 1⅓’ (that is two octaves and a perfect fifth above unison). It was also often the case that the French Fourniture began at a pitch just above the 2’ Doublette, much like organs in other countries. By comparison, however, the French Cymbale was pitched somewhat lower than its Germanic counterparts. The effect of combining bright principals with relatively low mixtures was that the latter could help to reinforce the bass of the former. In other words, French principals from this time tended to lose some of their definition in the bass, which was then clarified by the addition of the mixtures. The musical effect then of this Plein jeu is a sound that is majestic. This fundamental sound of principals and mixtures together was not suited to polyphonic textures, which is another aspect distinguishing these organs from those of other traditions throughout Europe. Indeed, the music written for this registration employs the gravity of this sound for slow-moving chords, sometimes punctuated by a pedal solo played on an 8’ Trompette.
Again comparing these French instruments to those of other national schools of the same time, we find some interesting facts regarding their Pedale divisions. The pedal keys themselves were typically rather short, and thus only playable by the toe of the foot, rather than both toe and heel as was the case in German instruments. This design has prompted the misconception that French organ music from this period does not make virtuosic use of the pedals, as was the case with composers such as Buxtehude and Bach. However, we have only to look at the double pedal movements composed by Marchand or the contrapuntal textures of a Quatuor or a de Grigny Fugue: anyone who has attempted to play these pieces beautifully on pedals of such size and shape knows how challenging the required technique can be. Indeed, they demand a virtuosity all their own. (To be continued.)
Your Friend,
Justin 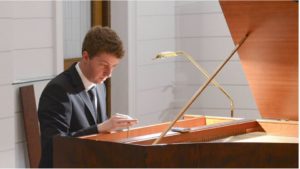 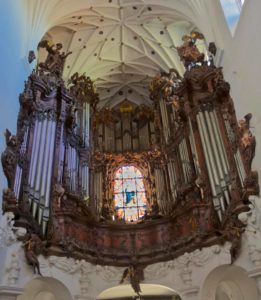 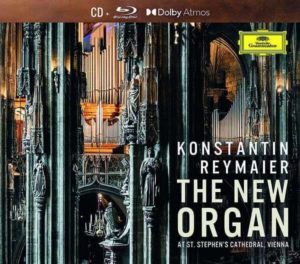